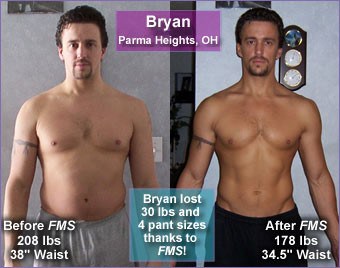 My name is Bryan and I am a 35 year old father of two.I had been working out since I was about 25 but somewhere around 3-4 years ago I must have started to let myself go.  It was such a gradual change I didn’t notice it happening; however, I realized how much I’d changed this past January.  You see, I will be getting married this July and my fiancé, Carey, and her bridesmaids were looking for a wedding dress.  The girls all got together one day to help Carey pick out a dress or at least get an idea from magazines.  They started passing around a magazine with a ripped guy in it and going nuts over how hot he was.  I turned to Carey and said “I look like that don’t I honey?”, to which she replied giggling, “You mean you used to”.  That’s when I realized all the “extra me” I was carrying around.  So in front of my fiancé and all the bridesmaids I stated that by the wedding I would look like that guy in the magazine.  The next day I woke up and thought how am I gonna pull this off?  I watched one of John’s commercials on TV that morning and decided I wanted to be one of his success stories too, so I ordered the Six Pack Abs and Fitness Made Simple: Unlock Your Potential DVD’s.

When the DVD’s arrived I sat down and watched each one from beginning to end.  The next day I modified my diet, started John’s workouts, and took a picture to mark my starting point…just as John suggests in the videos.  As 2 weeks passed I started to wonder if I was really losing anything.  This is where the pictures come in.  I reluctantly asked Carey to take my 2 week picture not expecting to see a difference but when I compared the first picture to the new one…Wow, what a difference!  I could see the changes starting already.  This gave me renewed inspiration and the same kind of thing happened like that every 2 weeks.  That’s what showed me how much Fitness Made Simple really works.  The next thing which really surprised me was how much energy I had.  I didn’t feel like sleeping all day. 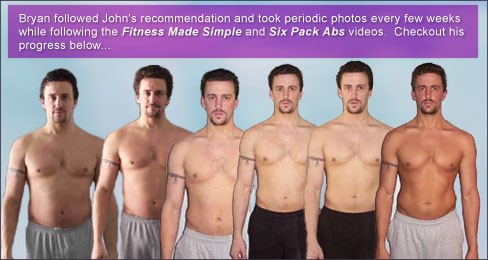 The way John approaches everything makes it fun and it never seems like a chore to workout.  I actually look forward to that part of my day.  By the wedding day I had kept my promise, thanks to John and Fitness Made Simple, and I had a renewed feeling of self-esteem.  On our honeymoon I was able to walk around the beaches with my shirt off and feel good about it!

When I started the FMS programs I was 208 pounds with a waist measurement of 38 inches.  After just 11 weeks I weighed 183 pounds and my waist dropped down to 34.5 inches.  Now, 18 weeks from the date I started following John’s simple tips, I am down to 178 pounds.  That’s 30 pounds I shed off…Wow!  As an added bonus I have lots more muscle tone too.

I know it is only going to get better from here.  Thanks John!!! 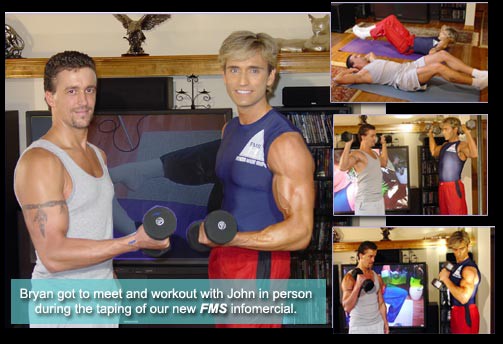