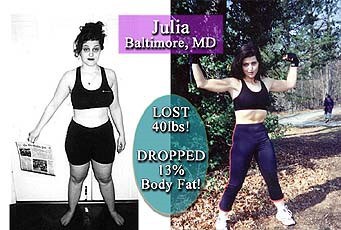 I have lost 40 pounds, dropped 13% body fat, and have made some serious other improvements.  FMS has helped a lot, especially with my ab definition.  I’m getting compliments all the time.  The nutrition facts helped as well.  Thanks to John I hope to become a fitness model and get down to 10% body fat by spring

Just to let you know, I referred a friend to John’s Six Pack Abs tape.  He was so impressed with the progress on my abs that he was convinced he should buy John’s tape.  Thanks to the Six Pack Abs video my abs look great.  I proudly go out in public wearing a sports bra so that everyone can see my abs.  I used to hide them in bulky sweaters.

Thanks  FMS!  You guyz and gals rock!