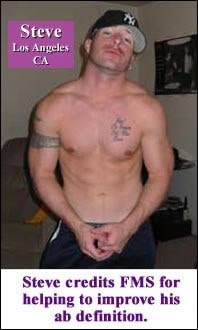 I just wanted to thank John.

After seeing his commercial on TV I finally ordered the Six Pack Abs video.  Although I’ve only been doing the video for a couple of weeks I feel much better about my abs and the definition is finally coming through.  Following his advice I’m trying to run everyday and eat better.

The photo shown is a result of his video but with no change in my eating habits.  I can only imagine how I’ll look once I combine healthy eating with the ab workout.

I still gotta get those lower abs ripped so his DVD will be in my DVD player 24-7.  Good lookin’ out John!

STEVE’S RESPONSE AFTER GETTING A CONGRATULATORY LETTER FROM JOHN…

What a treat to hear from you!

Well…I just finished another session of Six Pack Abs.  I’m doing a crash course in Fitness Made Simple since I’m hitting South Beach Wednesday night for my buddy’s bachelor party.  Again John…I’ve never stuck with a certain workout as long as I have with your video.  I end up laughing after a couple of routines the way you end the count with that singing style of saying “48, 49, FFFIIIFFFTTTYYY!!!!!  And you’re done for the day!”  It’s cool to hear you say you had a weakness for “dark chocolate with nuts”.  It shows that you’re human just like the rest of us and it takes discipline to eat right.

Thanks again John.  It takes a stand-up guy as well to respond to one of your customer’s emails…a SATISFIED customer at that.  Once again, you’re the man!  I wish you nothing but continued success…and your commercials on TV are working.  I ran right to the computer after I saw one.